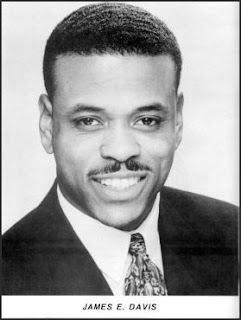 James E. Davis was born on April 3, 1962 to James and Thelma Davis. He spent his early childhood in the Bedford-Stuyvesant area of Brooklyn, then after a brief move to Long Island, his family returned to Brooklyn where they lived in Crown Heights.

As a young man growing up in Brooklyn, many influences shaped James' life. His father was a New York City Corrections Officer and his mother was a registered nurse. He was raised in the church and grew up in a rich, culturally diverse African-American, West Indian and Jewish community. In high school, James excelled in academics and sports. He earned his Bachelor's degree from Pace University, where he majored in Social Science and Youth Agency Administration. James is currently working on his Ph.D. in Sociology.

In 1983, an incident involving James and two New York City police officers left an indelible mark on James' life. One morning, he was in front of his house sitting in his mother's car. Suddenly, two white police officers approached, put guns to his head and accused him of stealing the car. While still pointing guns at his face, the officers dragged James from the car and repeatedly slammed his head and body against the car. Although his mother tried telling the officers they were making a terrible mistake, the officers ignored her pleas and continued their malicious attack. James was handcuffed behind his back and taken to the police station, where he was denied his freedom and held against his will. No charges were ever brought by the police. In addition to sustaining several bruises as a result of being beaten by the officers, James also suffered the humiliation of being falsely arrested and assaulted in front of his home, and in the presence of his neighbors.

Despite the pain and suffering James endured at the hands of police officers, James nevertheless turned his experience around and joined the NYPD police force. Today, as an instructor at the New York City Police Academy, James teaches police officers from all backgrounds the proper procedures for arrests and how to interact with people of different racial and ethnic backgrounds.

In 1990, James founded "LOVE YOURSELF" Stop the Violence not-for-profit organization. Concerned with the growing violence in urban communities, James began waging a war against guns, drugs, teen pregnancy and school delinquency. "Teenagers are getting pregnant by irreponsible fathers. Young people are carrying guns to school and others are dropping-out, increasing their chances of becoming juvenile delinquents."

James comes from a long line of warriors, so it was predestined that James would become one of the leaders of today's revolution against urban violence. His great-grandfather fought in the Civil War, his grandfather fought in WWI and his father fought in WWII. It is no surprise, therefore, that James embarked on a career in law enforcement. Starting as a New York City Corrections Officer at one of the toughest jails in America, on Riker's Island, James eventually became a New York City Police Officer and patrolled the streets of Brooklyn before becoming an instructor at the Police Academy.

James' philosophy on policing is that police officers should be ambassadors to the communities in their assigned precincts. One way for communities to relieve the tension and distrust between the police department and the residents is to "make sure that all programs reach out to these communities. Have channels set up where the message is sent effectively from headquarters to the local precincts and then to the street corner."

Fighting crime and violence is not simply a career for James -- it is his life. Like his father, grandfather and great-grandfather before him, James is a soldier who is in the war to end violence throughout America. "I look at this like a war. It's my mission in life to do whatever is necessary to rid violence from our communities." James' goal is for our children to have a future filled with promise and hope. "It's time to declare war in our own communities. Let the good people of the community (men, women and children) rise up and, with a war-like mentality, go take back our streets. We must show them, that they, the good people, are the silent majority and it's up to them to take back their community."

It is with this spirit that, in 1994, James went on to reason with major corporations like Toys "R" Us and MTV. With Toys "R" Us, James took issue with their sale of toy guns that looked like real weapons because kids were mistakenly shot and killed by police officers who thought the toy guns were real weapons. "Kids are taking toy guns and spray painting them to look real because they are scared. They have no power, and out there on the streets, a gun, whether real or fake, gives them a false sense of power." Michael Goldstein, the chairman and former CEO of Toys "R" Us agreed with his logic and pulled the "look-alike" toy guns off the shelves. Today, the immensity of this lifesaving effort by James is not lost on the hearts and minds of many parents.

When James turned the spotlight on MTV, they were not as willing, at first, to agree with him that some of the music videos played on their programs had a detrimental effect on the souls and minds of our nation's youth. Undeterred by their resistance, James gave the issue the same energy and perseverance he devotes to every important cause. Although his honesty often puts him in the center storm of controversy, his sincerity is undeniable. "We feel that MTV is not being responsible. It is the vehicle that some rappers use for violence that is perpetuating itself upon young people across the country. They are turning our youth into zombies of violence." Many artists feel justified in depicting violent or sexually explicit messages in their videos maintaining that they are just "keeping it real". James feels that MTV encourages lack of moral responsibility because, by airing these videos, MTV makes it profitable for artists to continue making demoralizing records and videos. After a relentless campaign by James, which included the threat to boycott MTV's major advertisers, MTV subsequently made an announcement that they would change their format regarding the airing of music videos.

Full of energy and never-ending passion, James continues to fight for the future of our nation's youth. James, an assertive, independent-minded individual, has appeared on several television programs as an advocate for positive change in the fight against youth violence, child abuse, domestic violence and police brutality. His work has been the subject of various newspaper articles and television news programs. As an outspoken community leader, James is very aware of the important role government plays in funding programs to combat America's problems with violence. That is why James has turned his attention to registering new voters, especially in neglected communities, where residents lack political power because they do not vote. James is also fighting to change the system from within by helping to oust politicians who continually ignore the problems while he and others like him, on their own time and with very scant resources, have fought to make significant positive changes. With his keen attention to detail and sensitivity to human suffering, James has become a tireless leader and positive role model -- traits not easily found in today's moral climate.

James E. Davis is supremely confident, multi-faceted and infintely courageous. From his capitivating presence before a large crowd to his ability to touch people individually, James has the makings of a legend. Boundaries, barriers, and borders crumble in his path when met by his wind of determination. Repsected by community leaders and admired by his peers, his outstanding reputation is the result of hard work, determination, creativity and courage.

Let us work together...BROTHER
For can you not see
That if you fight against me...BROTHER
That's the end of you and me.

Love Yourself - Stop the Violence!